Good Enough Therapist | Why Cursing Is Good For Us | Good Enough Blog
I love to use profanity at work. I find it to be an effective tool. I don’t curse as much in my personal life, unless of course, something just needs to be fucking said.
Good Enough Therapist, disruptive therapy, affordable therapy, affordable therapist, depression treatment, couples therapy, therapist venice, women's therapist, woman life coach, mental wellness, psychotherapist, female empowerment
22157
post-template-default,single,single-post,postid-22157,single-format-standard,ajax_fade,page_not_loaded,,select-theme-ver-2.4.1,wpb-js-composer js-comp-ver-4.12,vc_responsive
August 25, 2016

Why Cursing Is Good for Us: A Post About Breaking the F*cking Rules

And Why I Got Kicked Out of my Masters Traineeship

I love to use profanity at work.  I find it to be an effective tool.  I don’t curse as much in my personal life, unless of course, something just needs to be fucking said.

When I wrote “I Can Bullshit but I’m Not Full of Shit,” my dad wanted me to change “bullshit” to “bull crap.” I dismissed him immediately because they aren’t the same.  “Shit” and “Fuck” and “Badass,” keep us on the edge of our seats.  They shock and jar us.  They wake us up.  They don’t allow us to sit back and become complacent.

That’s what I have set out to do as a Disruptive Therapist.  My goal is to disrupt the status quo and do things a little differently (even if I have to make it up as I go). The reason this is so crucial to me is because, in my opinion, the current system of mental health care is broken.  There are just too many people out there who can’t afford care, and/or have no access.  And, there are far too many people who believe that receiving help is a sign of weakness.  It’s one of the strongest, bravest things a person can do.

Another reason the system is broken is because clinicians are so afraid to go against the grain.  It’s not their faults though.  It’s the system’s fault.  It’s the way we are taught, and the way we are made to fear any deviation from the norm.  The focus is on following the rules with proper note-taking, diagnosis, law and ethics, etc..  In my opinion, the greatest growth stems from something entirely different.  It comes from passion, life experience, transparency, testing, and questioning over and over and over.  Never stopping.  This can’t be achieved while operating within the rulebook 100% of the time (especially one that is hardly ever updated).

Side note: Just to be clear, I am not knocking all clinicians or all the rules.  I have experienced wonderful therapists, social workers, and counselors who work within the framework of the BBS (Board of Behavioral Sciences).  And I respect them a lot.

So now, I’m going to come clean about something that I don’t like to talk about to provide some insight.

While getting my Masters in Psychology, I got kicked out of my traineeship (like an internship while in school) working with kids at an elementary school.  I had never been in trouble before.  When I was an undergrad, I wouldn’t speak up in class or question anything.  I would sit in the back, out of sight.  So it was completely foreign to me when I was called into my supervisor’s office to be fired.

Throughout the process, I couldn’t remain silent and stop questioning.  The rules didn’t seem entirely right to me.  The focus was mostly on us, and not on the clients, and I couldn’t wrap my head around that.  I would do research and use my own money to buy books and games to use in “play therapy.”  I had zero experience with children, and I spent all of my time trying to figure it out on my own.  In the end, I really did make strong connections with these kids, and I could see tangible growth, which felt great.

Over the first few months of the traineeship, I learned how to take proper notes, organize client folders, keep track of hours (this is shockingly inefficient), and keep my ass covered in terms of liability. I also went to supervision with a group of trainees once a week.  Each trainee had a separate placement, so the supervisor had no contact with the various schools.

Early on, I was put on probation for forgetting to renew my driver’s license.  This isn’t a joke.  This was a BIG issue.  It wasn’t big, however, that I was able to help a physically and emotionally abused, 7-year-old boy with anger and anxiety problems by using breathing and meditation techniques (and a stress ball).  It wasn’t important that I was working with the family of an 8-year-old who had recently been dropped off at his aunt’s house while his mom was using drugs and living on the street.  That wasn’t big.  Me not renewing my drivers license was BIG.

After that, I just couldn’t move forward in the way they wanted me to.  I am now very grateful though.  I learned fast and hard that the traditional route wasn’t for me.  It’s only in hindsight that I have gained this perspective though.  At the time, I was devastated.

Also, when they gave me the boot, there was an understanding that I probably wouldn’t graduate on time.  I was given two weeks to find another traineeship, and it usually takes months and many interviews to get accepted, and to start collecting hours.  Luckily, I had worked in a rehab in Malibu alongside my badass mentor/friend, John Kim, founder of  The Angry Therapist, so I was able to procure a traineeship and supervisor in that small window of time.  I showed them!  Ha!

Perhaps the hardest part of being let go was that my supervisor wouldn’t let me say goodbye to the kids.  This was a big deal to me because they had issues with abandonment, and I was trying to be different and show up for them.  I told my supervisor that I needed to explain that none of this was their fault (children at that age tend to personalize).  Nope.  Not allowed.  I think it was another “liability” issue, but I was never given a straight answer.  I cried and pleaded and it crushed me.  I still think about them often.

Anyway, back to how cursing is awesome…

Profanity allows me to shake things up and to get others motivated.  It allows me to repackage these great, sometimes tedious psych theories and techniques in a way that is approachable.  I love the theories now, and I am a huge nerd for them, but I guarantee that if you try to read a Cognitive Behavioral Therapy (CBT) or Dialectical Behavioral Therapy (DBT) handbook, you’d probably fall asleep pretty quickly.  But, if it said “SHIT” and “FUCK” and “BADASS,” you might just stay awake.  And, I have discovered over the past few years that life is about being awake.  It is about risks and pushing through discomfort.  It’s about being different, and teachable, and forever curious.

So let’s wake up together.  Let’s stand up on our chairs and scream, 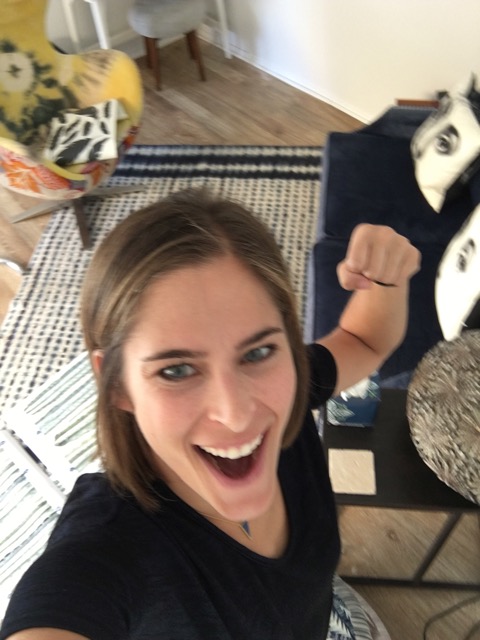